The Right Balance between Paganism & Bondage

The so-called "Christian" holidays, Christmas and Easter, were not observed by the Apostles or the Christian assemblies they founded until centuries after the Apostolic age. These holidays were devised by Rome in order to separate Christianity from its Jewish-Israelite foundation, and to attract the worshippers of the pagan gods. Certain points of the Christian Faith were blended with specific pagan holidays, trappings, and rituals. Yet God says to His people in the last days regarding Rome (Mystery Babylon), "Come out of her, my people, lest you share in her sins, and lest you receive of her plagues. For her sins have reached to heaven, and God has remembered her iniquities" (Rev. 18:4-5 NKJ).

However, the sacred memorials of Christianity, which have been so polluted with pagan trappings, ought to be remembered and acknowledged by faithful Christians, including the birth, crucifixion, and resurrection of Jesus Christ. These important truths, along with others which relate to Jesus' first and second comings and the Kingdom Hope, were all prefigured in "the Feasts of the Lord" which God instituted in Leviticus 23 - 25. Jesus honored all of them with His disciples. Paul stated that the Law of Moses was given as a tutor to lead Israel to Jesus Christ. This is precisely what the Feasts were intended to do, illustrate the Gospel and the true Christian Hope using allegories and symbols. Most of the Feasts (all but the Day of Atonement) will also be celebrated in the coming Kingdom. Why then do most Christians discard God's Feasts and instead participate in the cheap and polluted substitutes provided by "Mystery Babylon, the Mother of Harlots"?

We are not under the jurisdiction of the Law of Moses, but the Law of Christ, the New Covenant. This Covenant does not specifically compel us to observe all the Feasts, only Passover (1 Cor. 5:6-8). Yet, since all of the Feasts point backward to God's mighty acts in history, and look forward to Christ, His mission, and the Christian Hope, functioning as a "tutor," we should not ignore them or replace them.

Rome's cheap and commercialized counterfeit holidays, during which the ungodly celebrate with drunkenness, revelry, fornication, and sports (just as the pagans did on those holidays long ago), have nothing of value towards godliness, or remaining focused on "the Hope set before us, our anchor of the soul" (Heb. 6:19). Paul wrote that "Every Scripture is God-breathed and useful for teaching, for admonishment, for correction, for instruction in justice, so that the man of God may be complete, fully equipped for every good endeavor" (2 Tim. 3:16-17 LGV). This is certainly true of the "Feasts of the Lord" which strengthen our faith, give us an annual reminder of God's entire redemptive plan, and provide hope and endurance for the coming storm.

We do not keep the Sabbath according to the Law of Moses. We rest and assemble for worship on the Sabbath because God gave it to Adam and all his descendants 2,500 years before the Law for man's benefit. Jesus said, "The Sabbath was made for the man [Adam] and not the man [Adam] for the Sabbath" (Mark 2:27).

Shavuot (Pentecost) is the anniversary of the giving of the Law of Moses to Israel at Mount Sinai. The central tenet of this Law was what is called "The Shema." A metal plaque containing Deuteronomy 6:4-9 in Hebrew is still commonly posted on a plaque at the entrance to a modern Jewish home. It would not be a bad idea for Christians to do the same, in reference to the Law of Christ.

This celebration is a reminder to focus daily on bringing up our children in the ways of the Lord our God.

Jesus also brought the New Law, the Law of Christ, to free Israel from the Law of Moses, and bring the Gentiles into the inheritance apart from the Law of Moses. Shavuot is also the anniversary of the first Christian Pentecost, when Jesus sent the Breath of Truth to continue to illuminate and teach the proper application of His Law in this age.

"Children, obey your parents in the Lord, for this is right. 'Honor your father and mother,' which is the first commandment with promise: that it may be well with you and you may live long on the earth. And you, fathers, do not provoke your children to wrath, but bring them up in the training and admonition of the Lord." (Eph 6:1-4 NKJ)

We should use this holiday to annually teach our children the basics of the Law of Christ from Matthew 5-7.

Rosh Hashanah is New Year's Day on the original biblical calendar. It marks the aniversary of Day One of Creation week, as well as the birthday of Jesus Christ. God commanded Israel to celebrate this day with the blowing of trumpets (Lev. 23:23-25). It is the first day of the first month on the original (agricultural) calendar, and the first day of the seventh month on the Festival calendar.

Rosh Hashanah is what 'TODAY' refers to in Psalm 2, "You are My Son, TODAY I have begotten You." Jesus was the "Firstborn of all creation" (Col. 1:15); He is "The Beginning" (Col. 1:18). He called Himself "The Beginning of the Creation of God" (Rev. 3:14). Jesus said: "for out of God I have emerged" (John 8:42 - Gk.). He was the "Son" (Prov. 30:6) of whom Solomon wrote: "From the beginning, before there was ever an earth. When there were no depths I was brought forth, When there were no fountains abounding with water. Before the mountains were settled, Before the hills, I was brought forth; While as yet He had not made the earth or the fields, Or the primeval dust of the world," (Pro 8:23-26). Thus, the six days of creation begin with the begetting of the Son. At the appointed time, the Son "emptied Himself" of His divinity to become fully Man (Phil. 2:5-8), being born of the virgin on Rosh Hashanah, the aniversary of His begetting from His Father "in the beginning."

The book of Revelation provides us with the biblical date of Jesus' birth using astronomy, which falls on Rosh Hashanah, the anniversary of the first day of creation when the Son was brought forth out of God.

Revelation 12:1-5
1 Now a great sign appeared in heaven: a woman clothed with the sun, with the moon under her feet, and on her head a garland of twelve stars.
2 Then being with child, she cried out in labor and in pain to give birth.
3 And another sign appeared in heaven: behold, a great, fiery red dragon having seven heads and ten horns, and seven diadems on his heads.
4 His tail drew a third of the stars of heaven and threw them to the earth. And the dragon stood before the woman who was ready to give birth, to devour her Child as soon as it was born.
5 She bore a male Child who was to rule all nations with a rod of iron. And her Child was caught up to God and His throne.

The sun is in Virgo during September to early October. The new moon (which becomes visible just after sunset, and sets only minutes later) marks Rosh Hashanah, the new year. Below is a screenshot from Redshift 7 Astronomy Program showing the positions of the sun and moon in relation to Virgo just after dawn on Rosh Hashanah, just after Jesus' birth. 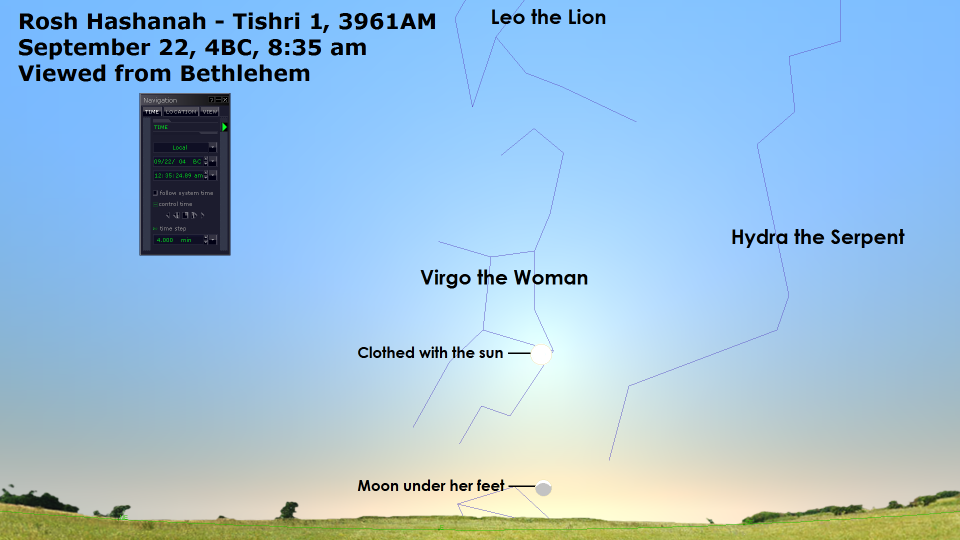 The Day of Atonement was the most solumn day on the Feast Calandar. It was the only day that the High Priest could enter the Holy of Holies to bring the blood into the presence of God. This day is filled with warnings, which if the priest did not follow exactly, he would be struck dead. For this reason it was the only day where everyone was required to fast. Jesus' second coming to destroy the Antichrist and his followers, and bring salvation to His elect, will be on this day.

The Feast of Tabernacles is a seven-day festival, memorializing God's faithfulness in bringing Israel through the wilderness into the Promised Land while providing their daily manna and all their sustenance. It is commemorated by building a small hut (tabernacle) to resemble the Israelites' temporary dwellings in the wilderness, and living in them for the seven days. It is filled with celebration such as singing, waving palm branches, and feasting, and is patterned after the Hebrew marriage feast which lasted for seven days.

For us, it is the celebration of God's faithfulness in providing our daily needs while we await our HOPE to be fulfilled when we receive the permanent inheritance of the Land in the resurrection. The "Marriage Feast of the Lamb" will take place during this festival in the Kingdom.

Hanukkah has rich meaning for us in several ways:
Since Jesus was born on Rosh Hashanah, September 22, 4BC (Gregorian Calendar), the Festival of Trumpets and the anniversary of Day 1 of Creation week, His conception in Mary's womb would have been on Dec. 10, 5BC. This is calculated by counting backwards from his birth the average human gestation period, which is 266 days from conception. This was Day 5 of Hanukkah in 5 BC, the day which represents Christ Himself bringing light into the world.